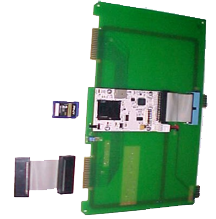 Fact: The mechanical floppy disk drives in the CNC-6 controllers are old technology and are wearing out. When one of your drives fails, chances are you’ll have to try to find a good “used” replacement of exactly the same type; because new ones are no longer being manufactured. Additionally, when the floppy disk drives in your machine start to intermittently fail, they will often begin to destroy the files on the floppy disks needed to run your machine. Very often you’ll replace a bad floppy software disk with one of your backup copies and it also quickly fails because it is being corrupted by a defective floppy disk drive. The result is the machine will be down until you replace the old, useless, floppy disk drive, and find still another uncorrupted floppy disk copy of your Excellon system software.

Solution: All of these problems go away forever when you install the EMU-1 Solid State Floppy Disk Emulator. This emulator has no moving parts and will undoubtedly outlive the machine in which it is installed. No more expensive service calls or down time for your machine because of floppy disk drive problems. All of the headaches related to using floppy disks simply go away forever. Additionally, you can backup all your system files on the SD card from the Emulator to the hard disk of any modern computer. Without the EMU-1 you can only backup your Excellon formatted floppy disks to other Excellon formatted floppy disks on the CNC-6. There is no other practical alternative.

Results: After the Solid State Emulator is installed; your machine will operate exactly as it did before. In fact, the CNC-6 computer sees no difference between data stored on a floppy disk and data stored on the SD card in the EMU-1. Actually, the CNC-6 CPU recognizes a major improvement in the timing and amplitude stability of the data pluses received from its’ floppy disk controller. The floppy disk controller, in turn, sees no difference between an original floppy disk and the new Solid State Emulator. However, the quality of the data stream from the Emulator is significantly better and does not vary in accordance to the surface condition of the recorded media. When your machine was designed, floppy disks were state-of-the art technology. Today devices such as digital SD cards, which are technically far superior and operate more robustly, have superseded floppy disks.

If you intend to continue using your Excellon CNC-6 drilling or routing machines, this is a machine upgrade you can’t afford to ignore. You absolutely need it! Contact California Software Systems today.

Please read the welcome message about our new website.